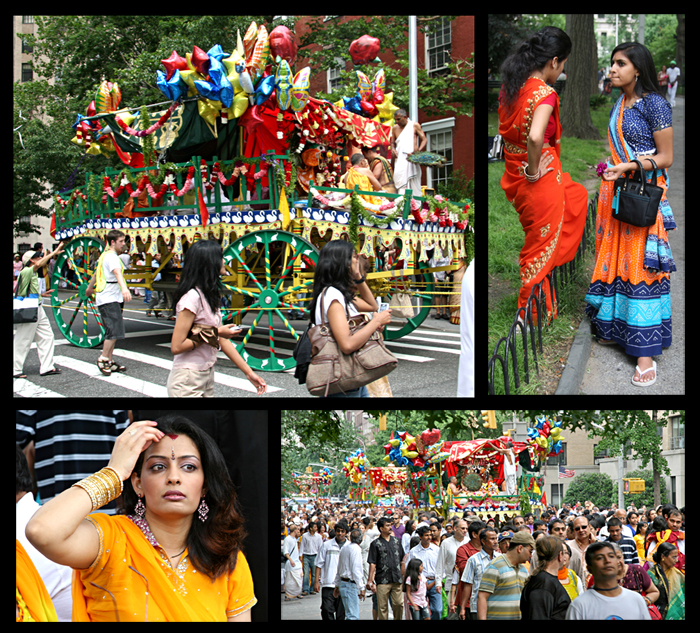 The Hare Krishna Parade starts at 59th Street and works its way down Fifth Avenue, with devotees pulling three chariots (with wooden figures of Jagannath, Balabhadra and Subhadra). It ends in Washington Square Park, where booths were set up for the all day Festival of India. A stage is set up for entertainment, showcasing Indian cultural and spiritual performances. There's free food, display booths of books on bhakti-yoga, meditiation, information on vegetarianism and Krishna consciousness. It was a very colorful event - those saris were beautiful. Click here for last years posting. Technically this is the Lord Jagannath's Ratha Yatra Parade - Hare Krishna's celebration of Ratha Yatra, a 5000 year old Hindu festival associated with Jagannath, a deity form of Krishna - the supreme god of Hinduism. If all this sounds a little complex, it is. Hinduism has many scriptures and incarnations and deities of God - it has elements of monotheism, polytheism, pantheism and monism. It is generally seen as henotheistic - a belief in a central God with other manifestations of God. The Krishna movement (International Society of Krishna Consciousness - ISKON) in this country is relatively new but is based on Gaudiya Vaishnavism and the practice of bhakti yoga. The American movement was founded in in NYC 1966 by Swami Prabhupada. He led a group of followers to Tompkins Square Park, where under an American elm tree they began to chant the distinctive 16-word mantra: ''Hare Krishna, Hare Krishna, Krishna Krishna, Hare Hare, Hare Rama, Hare Rama, Rama Rama, Hare Hare.'' The tree considered sacred by the Krishna adherents and in 2001, NYC's Parks Department officially recognized the historical significance of the Hare Krishna Elm tree ...