How Krishna Consciousness Came into My Life, Pt. 1 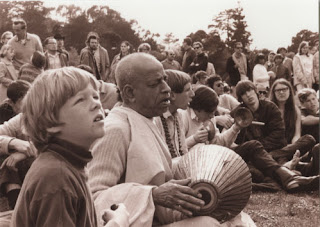 I have worked, off and on, on writing an account of the events that brought Krishna consciousness into my life. I'd like to offer here a draft of the first part of that article.

It was certainly not what anyone expected to happen that weekend. I had been in the Navy for almost three years and served as an intelligence analyst at the Pacific Fleet Intelligence Center at Pearl Harbor. Because of the security clearances necessary for my work, I generally avoided going to concerts such as this one. It seemed that attending a Grateful Dead concert, or a Jefferson Airplane concert at Honolulu’s Civic Auditorium during the late ‘60s would draw unwanted attention. But here it was, a full-moon night in May of 1969, and I couldn’t resist seeing the Jimi Hendrix Experience live at the Waikiki Shell. After the warm-up band played, Jimi came out and played a couple of numbers. Then he mumbled something about the sound system not being powerful enough for his music and said he’d be back in fifteen minutes.

After much more than fifteen minutes, one of the announcers from the local underground FM radio station, which promoted the concerts this weekend, announced that Jimi wouldn’t be able to play that night, but if we brought our ticket stubs on Sunday night, he’d perform for free. In the meantime, which might have been an hour or so, I heard a persistent sound from just outside the Shell: ching-ching-chiiiing, ching-ching-chiiiing, ching-ching-chiiiing, on and on. Sometimes it went faster, sometimes slower, but it never stopped during the entire break. As we left the Shell, what we found were perhaps the most exotic folks I had ever seen. There, under a large, rainbow-colored banner with the Hare Krishna mantra, were Govinda dasi, Sudama, Turiya das, and another young woman, playing karatals, a guitar, a rather exotic-looking drum, and chanting, “Hare Krishna, Hare Krishna, Krishna Krishna, Hare Hare, Hare Rama, Hare Rama, Rama Rama, Hare Hare.” As the crowd streamed out of the Shell, it gathered around the devotees, young people clapping, swaying, and chanting along. As I heard the mantra, I found it oddly familiar. Sure, I had heard the song from the tribal rock musical Hair on the radio, but this was different.