Prisoners and Jailers Dance Together 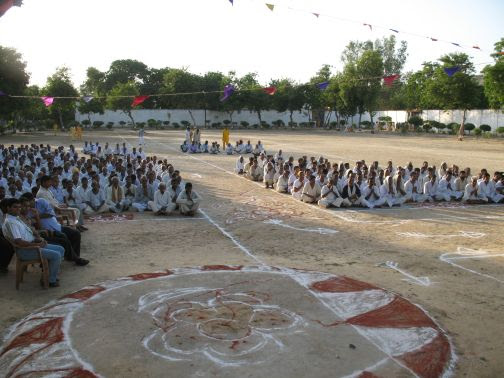 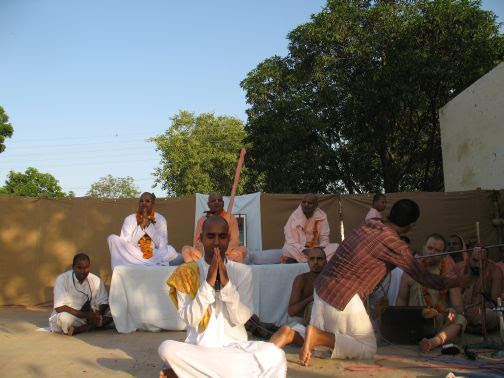 Every year for Janmastami we have a big program in Agra Central Jail with very enthusiastic participation from the prisoners who make Krishna Lila dioramas. Unfortunately this year there was civil unrest in Agra do to rioting by a certain community and there was curfew. But several days later after things were peaceful, the superintendent of the Jail invited us for doing a wonderful program.

So on 12th September, the devotees headed by Jankinatha Prabhu, our Prison Preaching in charge, went to Agra Central Jail. His Holiness Radha Govinda Maharaja was the guest of honor accompanied by His Holiness Radharaman Maharaja and our Vrindavan co-President, Srestha Prabhu. Somehow Jankinatha also convinced Aindra Prabhu and his kirtan party to come, although he hardly goes anywhere outside of Braja.

When the devotees arrived, the Chief Jailer and five Deputy Jailers were standing outside the gates with garlands to greet the devotees. From behind the gates, we could hear an enthusiastic kirtan being performed by the prisoners themselves. After opening the gates, they were greeted by about 20 prisoners doing kirtan with one playing dholak and another with harmonium strung over his shoulders. Aindra Prabhu was very impressed with the unique village melody they were chanting. All the prisoners were standing with garlands in their hands, anxious to honor the devotees. The kirtan at the gate was so ecstatic, that the jailers, prisoners, maharajas, and devotees all began to all dance together.

They accompanied the devotees up to the small Sita Ram Mandir run by the prisoners on the prison campus. They also have pictures of Radha Shyamsundar, Krishna Balaram, Gaura Nitai, and Srila Prabhupada on their altar. They even do Guru Puja, kirtan, and Bhagavatam class every day at this temple. Today they requested His Holiness Radha Govinda Maharaja to offer aratika.

After aratika, they accompanied the devotees to the stage where Maharaja offered a garland to the picture of Srila Prabhupada. Then the two maharajas and Srestha Prabhu took their seats on the asana. Janakinatha Prabhu lead the prisoners in Mangalacaran prayers and meditations as you can see in the photos. His Holiness Radha Govinda Maharaja addressed the prisoners and told them that Vasudeva carried Krishna from the jail and all the doors automatically opened up. In the same way if you will carry Krishna in your heart by chanting His Holy Name, then what to speak of the bondage of prison life, the bondage of this entire blazing samsara will be opened for you! He told them how they were very fortunate that the ISKCON devotees are coming here to the jail and giving you the message of Caitanya Mahaprabhu as imparted by Srila Prabhupada. Then Radharaman Maharaja spoke and Aindra also briefly addressed the prisoners with translation to Hindi by Srestha Prabhu.