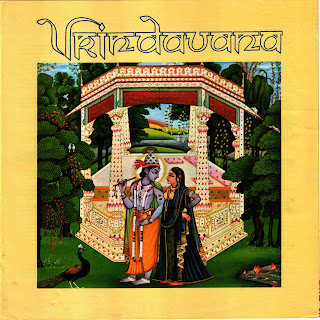 The Vrindavana LP, released by Parampara Productions, is tied for my favorite Classic ISKCON record with Temple Radha Krsna, also released by Parampara. It’s got almost everything you could want, including an amazing rendition of “Kesava Kali Mala” by Acyutananda Swami.

Sure, if you wanted to, you could see this as the poor-man’s Radha Krishna Temple (the George Harrison-produced LP that everyone has). Vrindavana seems to be trying mimic Radha Krishna Temple to a large degree. Most of the instruments are traditional, save a bass guitar and an often haphazardly played flute.

To me, however, the Radha Krishna Temple LP has always seemed over-produced. It’s too slick in many places and while a beautiful album, it doesn’t capture what you’d hear in the temple. Vrindavana pretty well fills that gap. It’s fairly well produced, but keeps enough of the temple spirit to satisfy my uselessly picky tastes.