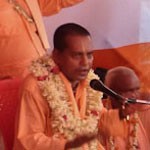 On 2nd June 2012,  Srila Bhakti Nirmal Acharya Maharaj and devotees from Sri Chaitanya Saraswat Math held a preach­ing pro­gramme in Panihati on the anniversary of Srila Raghunath Das Goswami’s Danda Mahotsav. In remem­brance of the mercy Nityananda Prabhu bestowed upon Raghunath Das Goswami, chira and doi (chipped rice and yoghurt) were sup­plied, offered, and dis­trib­uted in mass quant­it­ies to all in attendance.

In his lec­ture Srila Acharyadev com­men­ted that the festival’s name is the ‘Danda Mahotsav’ but that this ‘danda’ (‘pun­ish­ment’, or ‘fine’) is actu­ally the bless­ing of Nityananda Prabhu by which Raghunath Das Goswami obtained Sriman Mahaprabhu’s lotus feet and ser­vice under the guid­ance of Svarup Damodar. These Pastimes are described at length in the fifth chapter of Antya-khanda in Sri Chaitanya-bhagavat and provide a vivid example of Vrindavan Das Thakur’s glor­i­fic­a­tion of Nityananda Prabhu:

“The world received the Vraja-gopis’ devo­tion, which is described in Srimad Bhagavatam, from Nityananda Prabhu.”