An excerpt from Jagannath Puri Guide Book by Mahanidhi Swami 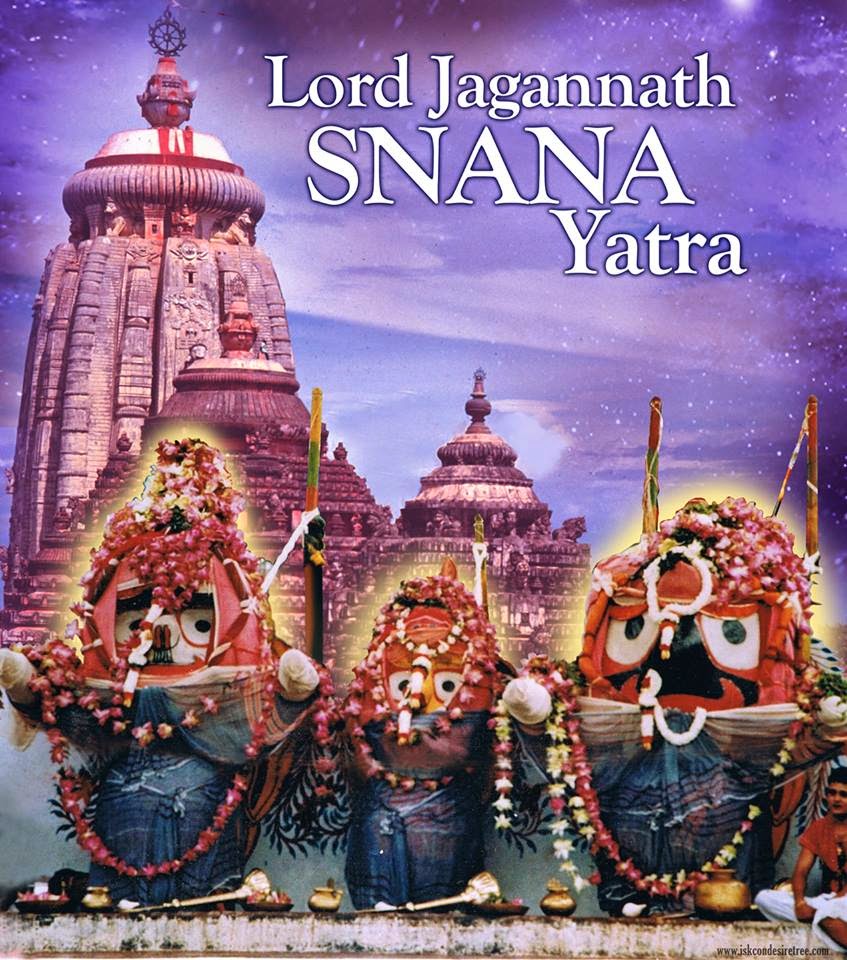 Millenia ago, King Indradyumna started the ceremony of bathing (snana-yatra) Lord Jagannatha with 108 pots of sandal-scented well water. At that time, Jagannatha Swami told the king that for fifteen days after snana-yatra, no one should see the Deities. Snana-yatra occurs on Jyestha Purnima (June full moon), one of the hottest days of the year. Skanda Purana says that Bhagavan Sri Krsna manifested His Daru Brahman form as Jagannatha Swami on this day. Therefore, Jyestha Purnima (Snana Yatra day) is the appearance day of Lord Jagannatha, which is Sri Krsna’s mahabhava-prakasa form depicting His devastation in separation from Srimati Radhika..
Just after sunrise, Balabhadra, Sudarsana, Subhadra and finally Jagannatha are brought in a hopping style procession to the bathing platform located on the northeast corner of the temple’s outer boundary wall. The Deities stand the whole day within public view under a multi-colored canopy. Pujaris bathe the Deities (abhiseka) with 108 golden water pots of refreshing sandal-scented water. From Snana-yatra until the end of Ratha-yatra, Jagannatha Swami is cared for by a group of pujaris called Daityapatis, who are descendants of the brahmin Vidyapati and Lalita, the daughter of the tribal (Sabara) chief Visvavasu.
“Jagannatha â Swami is burning in the intense fever of separation from Radhika in Vraja, so He is taken out on the temple roof to “cool off.” Unfortunately, Lord Jagannatha gets hotter, and the pujaris, in the mood of Vraja-gopis, pour 108 pots of cool sandal-scented water over Jagannatha’s head. But even this gives no relief and Jagannatha becomes hotter. Afterwards, Lord Jagannatha retires in a secluded place with Laksmi-devi for fourteen days. At this time, Jagannatha is fed coconut water and unpeeled fruits. Why unpeeled? That is the natural way fruits appear in the forest of Vrndavana. The fruits are given like this because it satisfies Lord Jagannatha by reminding Him of Vraja.” (Dr. Fakir Mohan)
A few times I had the fortune to attend Jagannatha Swami’s Snana-yatra in Puri. Since I am a western Vaisnava and not allowed in the temple, I took advantage of this rare opportunity to see the Lord. Standing on the street within one hundred feet of Jagannatha, I bathed the Lord with my own conchshell, dried Him, offered delicious milk sweets, and then a complete aratika”all for the satisfaction of Jagannatha Swami. One Puri brahmin, upon noticing my little attempt to serve the Lord, said, “Today, it appears that yours is the real worship of Jagannatha Swami.”
Srila Prabhupada explains how the merciful Lord Sri Krsna appreciates any sincere service: “Even though, externally, a devotee may not render full service, if he is internally sincere and serious the Lord welcomes his service nonetheless. Thus Sri Krsna is known as bhava-graha janardana because He takes the essence of one’s devotional mentality.” (SB 8.23.2 p.)
In late afternoon, the Deities appear in a striking outfit that looks like the head of an elephant; complete with trunk and big floppy ears. This dress is called Hati-vesa, which Lord Jagannatha once displayed to express His love for a devotee. Ganapati Bhatta, a devout servant of the elephant demigod named Ganesh, once visited Sri Ksetra. Beforehand, he was told that Jagannatha Swami is the supreme God and reveals Himself to every worshiper according to his individual mood. Expecting to see his lord Ganesh in Jagannatha, Ganapati Bhatta once attended Snana-yatra. But not seeing Ganesh, he went away disappointed. The all-merciful Lord Jagannatha secretly appeared as a brahmin and convinced Ganapati Bhatta to return for another darsana. Arriving before the Deities, Ganapati Bhatta saw Lord Jagannatha with the head of an elephant and thus fulfilled his desire.