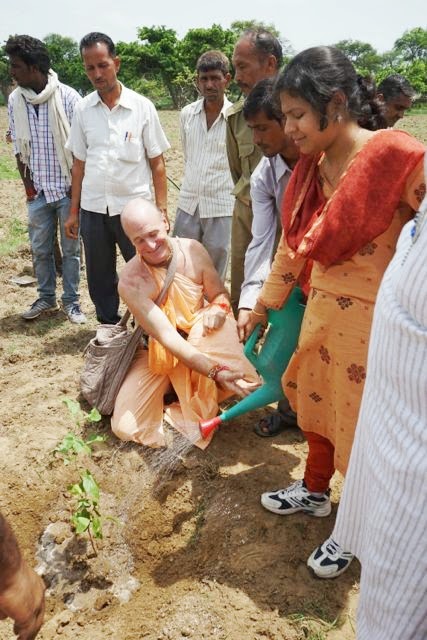 This might be considered a feather in the worldwide mission’s cap: caring for the Holy Dham through dham seva. It is furthermore a tribute to the place where its Founder-Acharya, on behalf of A.C. Bhaktivedanta Swami Prabhupada, desired to circumambulate in the final days of his physical presence in this world.

Representing the UP government was CDO Śrīmati Durga Shakti Nagpal, who met with local officials and Iskcon representatives, Bhaktisiddhanta Swami, Devaki Pran Das, and Aishvarya Das. Together they inaugurated the project by symbolically planting trees near Govinda Kund.

Iskcon representatives made requests of the local administration to provide electricity, water and four kinds of trees. The response from Ms. Nagpal was,  “Tell us the area where you plan to plant and we will provide land, water and solar lights. You do whatever you want, just plant! Iskcon is already doing such great work through their prasadam distribution.”

Several trees were planted on location by Ms. Nagpal and the Braja caregivers. The government is planning a 300 crore rupee project under its Member of Parliament, Hema Malini for development around Govardhan, including improving the road systems.

Dham seva for the preservation and protection of Braja is an affair where material and spiritual institutions can work together. The continued teamwork of concerned parties is a “unity in diversity” that can serve as a model for other similar projects such as rehabilitating the Yamuna. These are simple attempts to return Braj closer to its original glory.