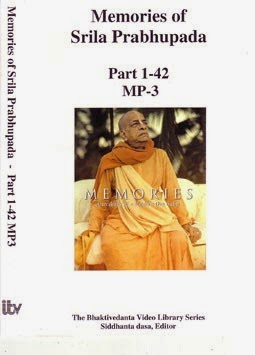 According to the ITV Productions website, this new series will contain “Nectarian interviews of devotees who have had personal viewing of the famous Memories of Srila Prabhupada series.” It continues, “Interviews with devotee who actually saw the original Memories of Srila Prabhupada reveal many sides to the Memories series, including poignant serious moments and light hearted humorous pastimes.”

Adding, “the Memories of Srila Prabhupada series has been around so long that few devotees can remember a time when it did not exist.”

While the exact release date of the early volumes of the original Memories of Srila Prabhupada series remains shrouded in mystery, several devotees can still recall their first viewing.

“I remember, it was probably two or three years after I joined up… or maybe it was when I moved to the Dallas temple…” said Krsna Prema dasa, adding “No, I got it, it was after I got back from my first time in India… or maybe it was my second, anyway, those videos were great.”

ITV has stated that they will be interviewing five or six devotees for each volume, starting with the devotees who joined up “sometime in the late 80’s or early 90’s.”

“The devotees who viewed the first several volumes of Memories of Srila Prabhupada have either blooped or are getting to the age where they soon won’t even remember viewing it,” said Priyavaisnava. “Time is now critical. It’s important that their memories are preserved for future generations.”

Keeping with their tradition of interviewing controversial devotees like Kirtananda das and Hamsadutta das, ITV plans on devoting an entire volume to Vraja Kishor das from the famous straightedge krishnacore band 108, who first viewed the series in the early 90’s while on tour with Shelter.

“Originally, we wanted to split that volume with Harley Flannigan of the Cro-Mags,” said Priyavaisnava, “but since Harley couldn’t even remember being a devotee, the entire volume went to Vraja.”

The Memories of Memories of Srila Prabhupada DVD series is projected to span 54 volumes, bringing this entire Prabhupada series total to an even 108, thus making it auspicious.