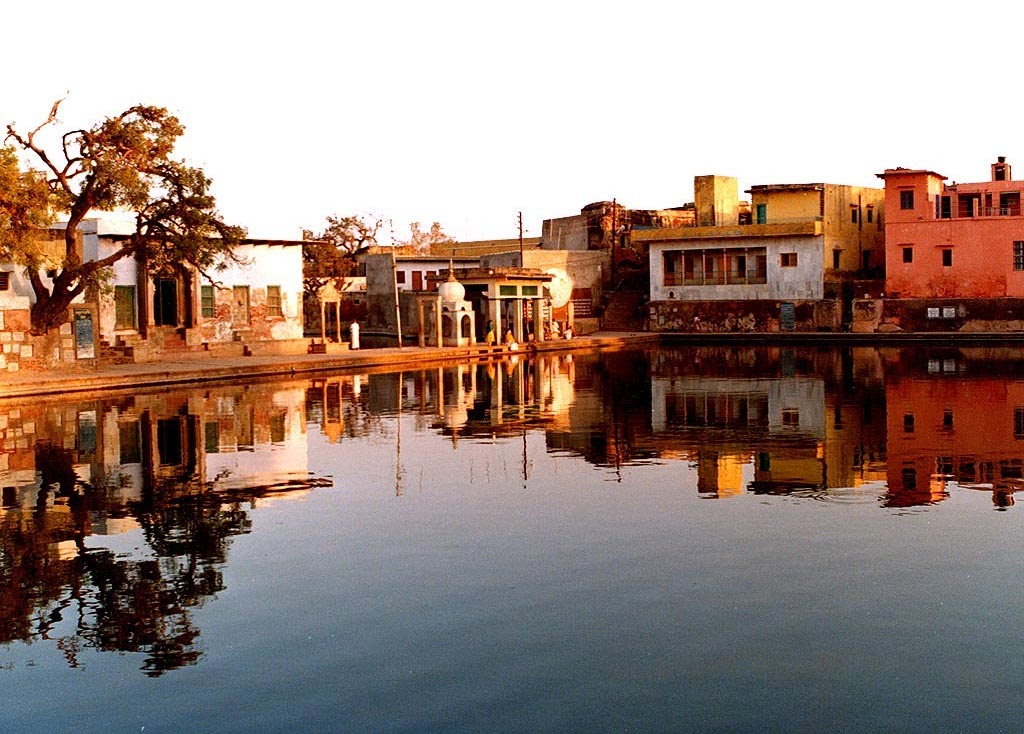 “Among all the gopis, Srimati Radhaji is most dear to Sri Krishna, being his principal prana vallabha. Similarly, Radhaji’s dear kunda is also very dear to him.”

“O Sri Radha-kunda! O Sri Krishna Kunda! You destroy all sins and award one-pointed prema. I bow down to you again and again.”

The Puranas are filled with innumerable descriptions of the glories of these two kundas.

“Not even Sri Vrindavana, which is supremely delightful because of places like the rasa filled rasa-sthali, or Sriman Govardhana, which is the arena of the nectarean rasa where the most confidential amorous pastimes (keli-krida) of the Divine Couple take place, are equal to even a shadow of a particle of the glories of Sri Radha-kunda, what to speak of other pastime-places within Vraja Mandala. I take shelter of this Sri Radha-kunda, which is more dear to Sri Mukunda than his own life.”

Sri Radha-kunda lies in a village named Arita Gaon, about three miles north-east of Govardhana and fourteen miles from Mathura and Vrindavana. Aristasura was a servant of Kamsa who assumed the form of a bull and attacked Krishna with the aim of killing him. However, Krishna killed him instead at this place.

At Sri Radha-kunda, Sri Radha-Krishna Yugala perform their midday lila-vilasa. Here they perform a variety of amorous pastimes freely and without any obstruction. This is not possible anywhere else. Therefore, Radha-kunda is considered to be the topmost place of bhajana, superior even to Nandagram, Varsana, Vrindavana and Govardhana. This most confidential place, surcharged with paramount bhavas, was revealed by Sri Caitanya Mahaprabhu himself, who is endowed with the bhava (sentiment) and kanti (luster) of Sri Radha. Previously, Sri Madhavendra Puri, Sri Lokanatha Goswami and Sri Bhugarbha Goswami also came to Vraja, where they revealed various pastime-places of Krishna; but they did not reveal this confidential place, which was manifested by Sri Gaurasundara himself, who is Sri Radha and Krishna combined.

Sri Krishna killed Aristasura during the day. That same night, he met with his beloved Sri Radhika and the other sakhis here. Sri Krishna was very eager to embrace Srimati Radhika, but as soon as he reached out towards her, she stepped back. Jokingly, she said, “Today, you have killed a bull, which belongs to the cow family. You have therefore committed the sin of killing a cow. Please don’t touch my pure body.”

Krishna smilingly answered, “Priyatame! It was a demon that I killed, who had deceitfully assumed the form of a bull, how can sin even touch me?”

Srimatiji insisted, “Whatever he was, he had assumed the form of a bull when you killed him. Hence, the sin of killing a cow has definitely touched you.” The sakhis supported Her statements.

Sri Krishna asked how he could atone for this sin. Smilingly, Srimatiji answered, “The only atonement is to take bath in all the tirthas of the entire Earth planet.” Hearing this, Sri Krishna created an extensive kunda simply by striking his heel on the ground. He then summoned all the tirthas of the entire planet to it. Uncountable tirthas immediately came before Krishna in their personified forms. Krishna asked them to enter the kunda in the form of water. In a moment, the kunda filled with pure, sacred water. Sri Krishna took bath in that kunda and again tried to touch Srimatiji. But Srimati Radhika now wanted to manifest a kunda full of water that was larger and more exquisite than Krishna’s, in response to her priyatama‘s bragging. She and her sakhis therefore stubbornly dug out a very attractive kunda nearby with their bracelets. However, not so much as a drop of water appeared in it. Krishna joked that they could take water from his kunda, but Srimatiji along with her innumerable sakhis prepared themselves to bring water from Manasi Ganga in clay pots. Sri Krishna signaled to the tirthas that they should insist that Srimatiji and her sakhis fill up their kunda by taking water from his kunda. The tirthas personified pleased Srimati Radhika by offering her and the sakhis many prayers. Srimati Radhika then gave them permission to enter her kunda. Immediately, the current of water that had flowed into Krishna-kunda also filled Radha-kunda. With great pleasure, Sri Krishna bathed and performed watersports (jal-vihara) with Srimati Radhika and the sakhis in this dear kunda.

These two kundas manifested at midnight on Krsnastami (the eighth day of the dark moon) in the month of Kartika. Hundreds and thousands of people therefore bathe here at midnight on this day known as Bahulastami.

“Radiantly beautiful Sri Radha-kunda is situated at the foot of Govardhana Hill. Faithful persons who bathe here on Krsnastami in the Kartika month receive prema-bhakti filled with the seva of Sri Radha-Kunjabihari Sri Hari.”

“On the day of Dipavali in the month of Kartika, the ekantika (one-pointed) bhaktas of Sri Radha-Krishna can see the entire universe and the complete Vraja Mandala in Sri Radha-kunda.”