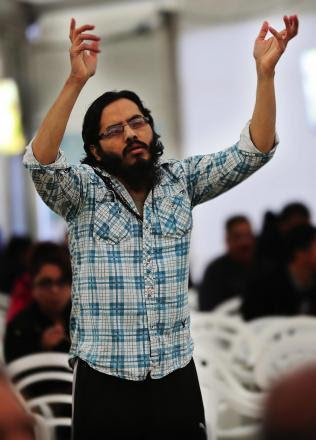 More than 10,000 people from across the UK came together at the Bhaktivedanta Manor Hare Krishna Temple in Hilfield Lane, Bushey, on Sunday to celebrate Diwali.

Bhaktivedanta Temple was donated by the Beatles star, George Harrison, to the Hare Krishna movement in 1973. It is the only temple in the UK to host a Diwali fireworks display on such a big scale.

Communications secretary for the temple, Radha Mohan Das, said: "The day was a really big success, everyone had a lot of fun. There was a great atmosphere, particularly in the lead up to the fireworks."

The day also saw two drama perfomances, which told parts of the story behind Diwali.

Diwali celebrates the triumph of good over evil, which is told in the ancient Indian text, Ramayana.

Their journey home took place during the night in complete darkness and to guide them home safely thousands of local villagers, celebrating their return, lit up their route by hanging lamps, lighting divas, candles and fires - which is why it is often called the festival of lights.

Mr Mohan Das, who also took part in one of the drama performances added: "This is one of the biggest festivals we host and we have around 100 people who have volunteered their time to help organise it. We couldn't have done it without them."

President of the Bhaktivedanta temple, Srutidharma Dasa, said: "Diwali is traditionally a time for families to come together. It gives us an opportunity to give to others - helping those who are less privileged than ourselves. And to forgive - and by forgiving, it grants us the opportunity for new beginings."