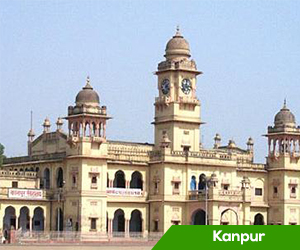 KANPUR: In contrast with communal flare-ups in several towns in western UP, a 45-year-old Muslim farmer in Kanpur Dehat's Murra village has come out as a perfect example of communal harmony. Observing Ramzan religiously, the man has constructed a temple dedicated to Radha-Krishna which is attracting people in droves.

The villagers said that the construction of the temple by Raees Mohammad was an example of Hindu-Muslim brotherhood. Raees has also arranged a priest and personally participates in the prayers at the temple.

"Popular as 'Bhaijan', Raees (45) dons a scull cap and a 'bhagwa' (saffron) scarf. He claps, dances and sings 'bhajans' loudly in the Radha-Krishna temple. At first glance, he looks like any other Hindu devotee, but he vouches he is a devout Muslim. In fact, he has also appointed a priest for the newly-built temple which houses idols of Radha and Krishna," said a villager.

"Raees not only observes Ramzan fast and offers namaz regularly, but also performs 'bhajan' and 'aarti' at the temple. Recently, he organised 'Akhand Ramayan' path and 'bhandara' (community feat)," said the temple priest Shiv Kumar Dikshit adding, "Raees has spent Rs 2 to 3 lakh of his savings on the temple's construction."

Raees said he was inspired when prayers offered at a Radha-Krishna temple situated at a nursing home 'cured' his wife Qamrunisa. "Prayers offered before the idols of Radha-Krishna at the temple cured my ailing wife. After that, I decided to build a temple of Radha-Krishna in my village too," said Raees. Born at Murra near Rasoolabad, Raees' family is among the 15 Muslim families living there.

The Hindu community in the village is grateful to him for setting a precedent of Hindu-Muslim unity. "Almost all religions preach love, peace and brotherhood. God in different forms is one and he does not discriminate. It makes no difference for us as to who has constructed the temple. It has now become a symbol of communal harmony in the area," said Ram Kumar, a local of Murra village.

The commendable work of Raees is being lauded by villagers of not only Murra area but also by neighbouring villages also. "This is a positive development for the village as a whole. It is real work in the direction of bringing both the communities closer," Naresh of neighbouring Rasoolabad area, said.