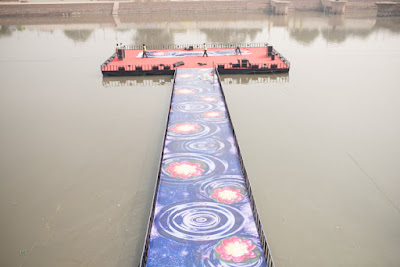 A week-long festival seeking to unite different cultures and create an environment of peace and harmony will be held here from November 18 to commemorate the 500th anniversary of the 16th century monk and reformer Chaitanya Mahaprabhu.

Vrindavan Prakash Mahotsav is set to bring together at least 40 different styles of music from 25 states across the country.

Chaitanya Mahaprabhu is said to have promoted the community-style devotional worship of Krishna with kirtans.


President Pranab Mukherjee, Uttar Pradesh Governor Ram Naik and Chief Minister Akhilesh Yadav along with host of dignitaries will be present at the inauguration on November 18.

Of the various avatars of Vishnu, he revered Krishna and popularised the chanting of the ‘Hare Krishna’ mantra, also known as ‘Sankirtan.’

“India is known for acceptance and tolerance, and we want this festival to be known for that. The essence of this festival is to create love and harmony,” says Abhishek Goswami, the convener of the festival.

With Manipuri manjiras fusing with mridangams from Bengal and Manganiyar musicians from Rajasthan, the festival aims to “bring the whole country together in a single sutra.”

“The main objective of the festival is creating a bridge between all forms of culture, music and to emanate love,” says Mr Goswami.

Organised by Vrindavan based organisation, Earth Voice, with the support of Kathak Kendra, the Sangeet Natak Akademi and Dharmik Leela Commitee, the festival would host musical legends including Sanjeev Abhyankar, Kalapini Komkali and Trichur Brothers.