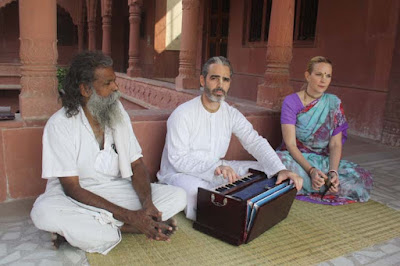 A devotee couple, having imbibed Krishna-bhakti since childhood, is dedicated to spreading Krishna-kirtan around the globe. Residents of Gopinath Bhavan in Vrindavan, Sudevi Dasi and her husband Kishori Mohan are from California.

Childhood friends since their Gurukula days, they met Narayan Maharaj in 1996 and became devotees of Krishna. Although their parents are Christians, they chanted the Hare Krishna Mahamantra, attended Mangal Arati, and listened to the pastimes of Krishna since childhood. They have been practicing Krishna-bhakti and kirtans for the past 17 years.

Acclaimed for their Kirtans, their album Bhakti without Borders was also nominated for the Grammy Awards last year.

They wedded in the traditional Vedic manner 21 years back in the Rupa-Sanatana Gaudiya Matha at Seva Kunj.