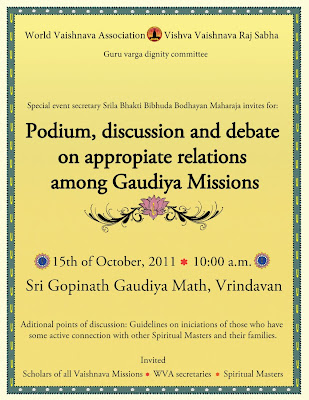 Devotees from the VINA News Blog ( http://vinacc.blogspot.com/) have informed about a WVA Meeting and Debate which took place some days ago at the Sri Gopinath Gaudiya Math in Vrindavan.  This is their report:

At the Sri Gopinath Gaudiya Math, Old Dauji Temple, in Vrindavan was celebrated a new meeting of the WVA the past 15th of october. The event was focus on "Podium, discussion and debate on appropiate relations among Gaudiya Missions" 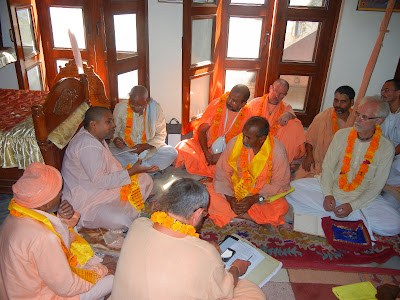 Almost 30 representatives of the different Gaudiya Missions assisted for discussing diferent topics, but the main was the need to situate Srila Bhaktisiddhanta Saraswati Thakur Prabhupada as the greatest hero of divine love in all India. In that way it was presented a new web site about Srila Prabhupada, and here is the link for everyone interested in know more about this great soul - www.bhaktisiddhanta.com .
More information here:
http://vinacc.blogspot.com/2011/10/world-vaisnava-association-meeting-at.html

In another report, published by Prabhu Krishna Kirtan Das at the VINA News Blog ( http://vinacc.blogspot.com/), there are more news about this great meeting of the World Vaishnava Association at the Gopinath Gaudiya Math, in Vrindavan, India, which have been published at the Vrindavan Today site ( http://www.news.vrindavantoday.org/ ) .  This is the report:Vrindavan, 2011.10.16 (VT):
At a meeting of the World Vaishnava Association at the Gopinath Gaudiya Math in Gopishwar Mahadeva, Om Prakash Brajvasi said that all the branches of the Gaudiya Math are the result of Prabhupada Srila Bhaktisiddhanta Saraswati's preaching, but that his contribution was yet to be fully recognized by the wider public.Bhakti Aloka Paramadwaiti Maharaj said that there are more than 100 ashrams and maths in the Braj area that are connected to the Gaudiya Saraswata family. "We could be a powerful force and get a lot of things done if we were able to work together," he said. He listed a number of tasks related to the environment and the Yamuna River in which the World Vaishnava Association could play an important role. "But we are addicted to acting separately," he said. 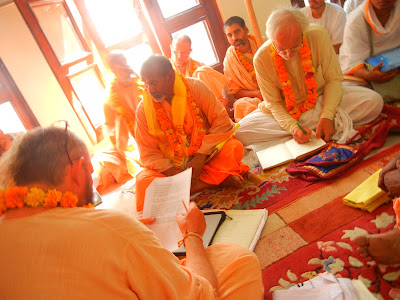 He unveiled a website for the express glorification of Bhaktisiddhanta Saraswati Thakur and said, "The only way we can find unity is if we agree to work together to establish the heroic role that he played in Bengal."Bhakti Swarup Sannyasi Maharaj of the Gaudiya Mission said that he wanted to build a "Prabhupada Museum" in Kolkata for precisely that purpose. It was noted that in Kolkata, the ghats on the Hooghly River near the Bagh Bazaar Math are named after people like Lokanath Brahmachari, who may or may not ever have come there, but that a saint with the international influence of Bhaktisiddhanta Saraswati Prabhupada remains unrecognized.Mahavir Swami suggested why not a Chaitanya Museum here in Vrindavan, and he offered to give 400 square yards of land near Govinda Kund for that purpose. 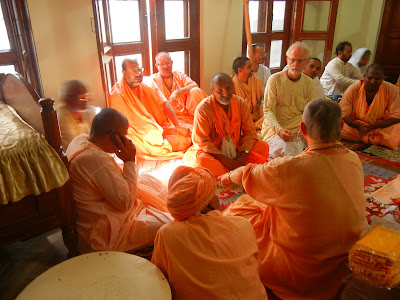 It was also proposed that a fortnightly publication called Prabhupada Vani should be started for disseminating the news of all the branches of the Gaudiya Math and missions worldwide. Mahavir Swami agreed to take responsibility for the publication and asked that all the maths provide materials to be published. 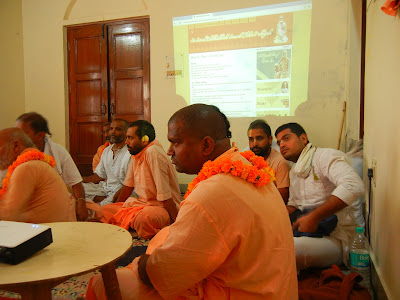 The thorny problem of the annual procession at the time of Bhaktisiddhanta Saraswati's appearance day was tackled with little resolution. Last year another association of Gaudiya Math Vaishnavas held a procession on that occasion with the stipulation that only Srila Prabhupada Siddhanta Saraswati's picture was to be allowed. When some participants came with other pictures and banners, they were torn by zealous defenders of the rule. This led to heated exchanges and bad feelings. 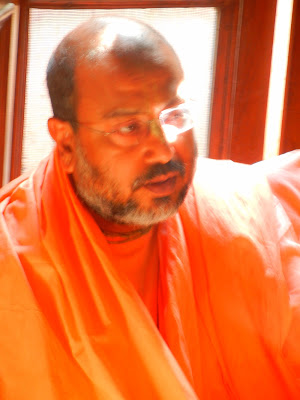 Bhakti Bibudh Bodhayan, president and acharya of the Gopinath Gaudiya Math suggested a compromise solution of allowing Bhaktisiddhanta Saraswati's disciples' picture on the main rath, but nowhere else.Paramadwaiti Maharaj disagreed and said that each math should come out in full force with the pictures of their gurus and festoons and banners. "If we show how many different groups belong to this family of Saraswata Gaudiya Vaishnavas, how many saints and powerful preachers have come through this line in such a short time, then people will begin to grasp the importance of Saraswati Thakur's role in spreading Krishna consciousness. That he was the true root of this international movement which has had such an influence on Vrindavan today. All the disciples should be allowed to glorify their own gurus as vibhutis of Bhaktisiddhanta Saraswati."
Source: Vrindavan Today - published by Krishna Kirtan Das
http://www.news.vrindavantoday.org/2011/10/wva-looking-for-ways-to-glorify-bhaktisiddhanta-saraswati/?mid=504
More information here:
http://vinacc.blogspot.com/2011/10/wva-meeting-looking-for-ways-to-glorify.html
Hare Krishna Missions, ki jay !
Hare Krishna News, ki jay !
World Gaudiya News, ki jay ! 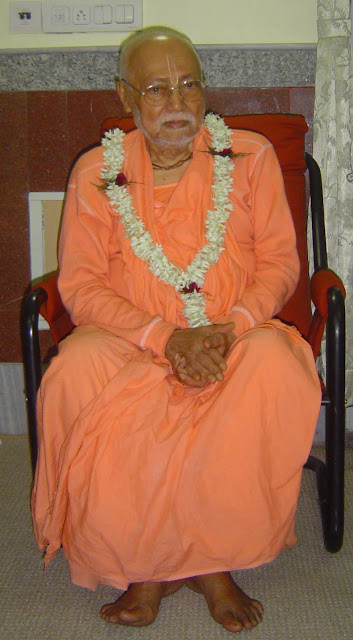 Devotees from the VINA News Blog ( http://vinacc.blogspot.com/)  have informed about 50th anniversary of the sannyas ceremony of Srila B.B. Tirtha Maharaj.  This is the report:

The glorification of a pure devotee is always a moment to rejoice, even more if we are talking about the 50th anniversary of the sannyas ceremony of Srila B.B. Tirtha Maharaj. On the 11th of october, at the Govardhan Temple of the Sri Chaitanya Gaudiya Math, we participated of the celebration of this great and beloved vaisnava, who is furthermore the president of the World Vaisnava Association. Hundreds of people came to offer their reverences and to honor him. The festival also was attended by several representatives, acharyas and sannyas, of different missions.


Srila B.B. Tirtha Maharaj gave darshan and beautiful hari-katha to all the presents, enhancing his Guru Srila B.D. Madhav Maharaj and the vaisnavas in general. The ceremony concluded with a delicious prasadam party. 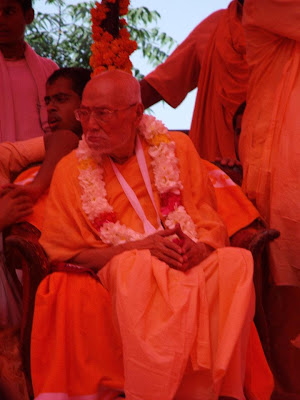 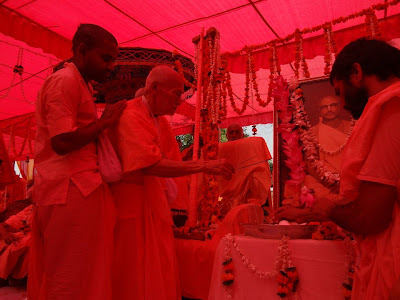 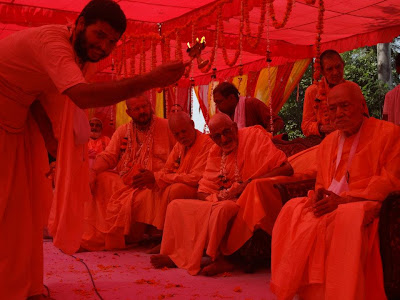 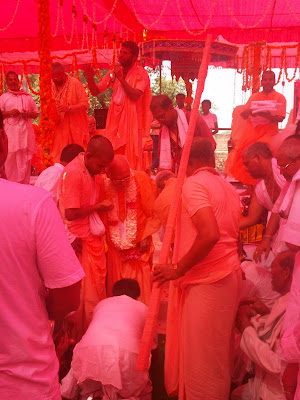 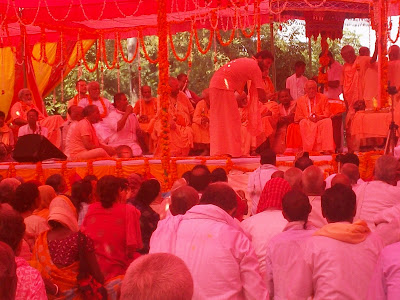