Feeding the body and the soul

Every Friday morning Steve Szili heads to the Hare Krishna Temple in Potomac to cook meals that are meant to feed body and soul.

Szili leads the Potomac chapter of Food for Life, the world’s largest vegetarian food relief organization, according to its Web site. It is based in Hare Krishna — a faith rooted in the belief that a person’s thoughts and emotions go into everything they cook.

‘‘We believe when somebody cooks any food the person’s conscience goes into the cooking,” said Chaitanya Bhagavan Dasa, temple manager and head minister. ‘‘It’s not simply giving the food and satisfying one’s hunger, it’s also feeding the soul and satisfying the hunger the soul has.”

Food for Life is one of at least 10 outreach projects at the temple. At least 50 percent of the congregation helps by cooking with Szili, helping him with events or donating money.

The Hare Krishna Temple in Potomac has approximately 7,000 members and is the only one in the Washington, D.C., area, with the closest temple in Baltimore.

Food for Life was established by two Hare Krishna monks in 1974 after the founder of the Hare Krishna movement, A.C. Bhaktivedanta Swami Prabhupada, saw children fighting with dogs over scraps of food in India, according to the organization’s Web site. He then said that no one within a 10-mile radius of a Hare Krishna temple should be hungry.

Today, the organization distributes at least 1 million healthy vegetarian meals each day, according to Food for Life director Paul Turner. It has 20 programs in the United States as well as programs in 50 countries around the world, which include free food kitchens, emergency relief and educational programs in schools.

It may not be quite what you think.

Govinda's Vegetarian Buffet, a new restaurant at 1030 River Road, has roots that run deep into the culinary and spiritual beliefs of the Hare Krishna movement.

But if you're picturing finger cymbals, robes and airport lobbies, you're well off the mark.

"That's pretty much history," says David Minor, who opened the restaurant earlier this month. "The movement's evolved. Krishna consciousness has expanded all over the world, and it's like a tree - there are so many branches. But it's always stuck to the principles."

Those would include healthfulness and spirituality, which is where the restaurant comes in.

Govinda's restaurants can be found worldwide, operated independently either by temples or - as in Minor's case - by individual devotees. There is no set menu or format, although most offer at least some East Indian dishes. None serve foods with meat, fish, eggs, onions or garlic - all of which are considered either physically or spiritually harmful.
advertisement

"One of the primary activities of (Hare Krishna) devotees is to prepare, offer food to God and distribute it," Minor says. "We have guidelines that our spiritual master gave us, in terms of diet and how to offer the food."

Solar panels are joining the crosses that adorn Christian churches, as well as a Hindu temple's parking lot lights and possibly a Calgary synagogue and Toronto mosque as faith groups across Canada act on the so-called Green Rule: "Do unto the Earth as you would have it do unto you."

Cornish said her solar panels are "an outward and very visible sign that we are deepening our commitment to important environmental issues."

Congregations are also caulking air leaks, reducing garbage, conserving water, and installing rain barrels, compact fluorescent light bulbs, energy efficient furnaces and appliances -- all in an attempt to live out their common belief that humans need to care for their planet.

"It's a whole nascent movement, a green faith movement," said Rory O'Brien, program coordinator of the Greening Sacred Spaces program run by the ecumenical group Faith and the Common Good, that has a network of affiliates in B.C., Alberta, Ontario and Nova Scotia. "We were really taken aback by the interest out there."

In Ontario, Sacred Spaces is involved with 77 congregations, half Christian and half Muslim, Jewish, Hindu, Sikh, Buddhist, Bahai, Unitarian, Zen, and Hare Krishna.

Walking a distance of 7,800 kilometers across that too not once but thrice. For a smiling Hare Krishna Monk Swami Bhaktimarga, the walk brings him close to nature and people and it also keeps him healthy. 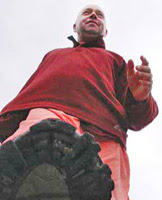 "Most people have causes. This is a different thing. It's reflective walking."

The swami -- who joined the Hare Krishna in 1973, and was known as John Vis -- says his reasons include his deep respect for nature, an attempt to improve his health and, lastly, because he's on a pilgrimage

So how is the third cross-Canada walk different from the earlier ones?

This year's festival, which included a parade, puppet shows, concerts, and a free vegetarian feast, was bigger and more diverse than ever, said its organizer, Jay Govinda.

This year's Sri Krishna Shringar - the annual dance festival in Iskcon will be flagged off by a delightful solo repertoire by Nrithya Choodamani Priyadarshini Govind who will depict the Vatsalya Bhaava, the Shringaara Bhaava and the Bhakthi Bhaava in Krishna Avatara.

dance this year to celebrate Krishna in all his manifestations. In a week long series of devotional ballets, Bangalore audiences will be treated to a rare assembly of renowned artists from across the country.

This year's festival will be flagged off by a delightful solo repertoire by the popular Bharathanatyam artist, Nrithya Choodamani Priyadarshini Govind who will depict the Vatsalya Bhaava, the Shringaara Bhaava and the Bhakthi Bhaava in Krishna Avatara in her own inimitable style.