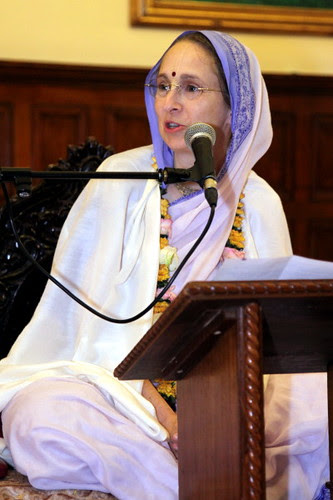 While we live on the Earth and use its products, the solid forms of Krishna’s energy can remind us of Him.

It may seem there can be nothing more ordinary, more the essence of matter, or more mundane than the Earth. But when we take a moment to notice and reflect, our awareness of the ever-present Earth can easily stimulate the most elevated plane of spiritual consciousness. Krishna has categorized His gross material energies as five: earth, water, fire, air, and ether. In modern terms these energies are called solids, liquids, radiant energy, gases, and space. Therefore, Krishna’s energy of “earth” refers to all matter in a solid state. Yet, because the planet Earth is the biggest example of this energy, we will here use the planet as symbolic of solid matter in general.

Krishna, the Supreme Lord, is both identical with and separate from His energies. By meditating on His energies, therefore, we can learn much about Krishna and appreciate His presence. Krishna recommends such meditation throughout the scriptures. For example, at Kurukshetra He tells the cowherd girls of Vrindavana, His beloved devotees, to always feel His presence through His energies. Prabhupada comments: “This important instruction by Lord Krishna to the gopis can be utilized by all devotees engaged in Krishna consciousness.… The cosmic manifestation is nothing but a display of Krishna’s energy, and because the energy is not different from the energetic, nothing is different from Krishna. When this absolute consciousness, Krishna consciousness, … is present, then we are not separated from Krishna.”
The Planet Earth Reminds Us of the Lord

Rocky peaks of the Olympic Mountains, wearing hair of snow, poke through the clouds on the horizon, viewed across the water from where I walk on Vancouver Island in Canada. Huge, solid, beautiful, majestic, those towers of earth draw one’s eyes again and again.

Other than occasional dramatic displays such as cloud-piercing mountains, the Earth often goes unnoticed in daily life. But the Earth exhibits qualities that can easily remind us of the Lord’s qualities. For example, the Earth is solid and dependable, and Krishna is so dependable that even demonic beings know that if they follow universal rules, the Lord will not harm them. Anyone can depend on Krishna to accept offerings made with faith and devotion, regardless of the person’s background or material qualifications.